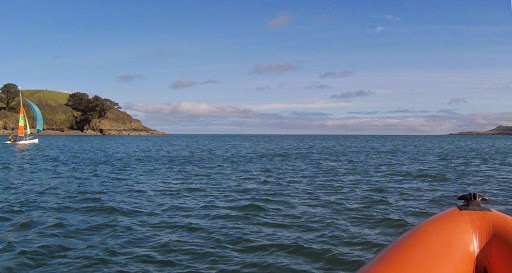 This last weekend I was supposed to be teaching a powerboat course. That was the plan. Then my clients cancelled and I thought it would be a great idea to take my friend out instead. Then he cancelled due to some serious toothache and so I suggested to my family that they might like to come out. (not that they’re last resort or anything, it’s just the way it happened!)
The weather was due to be rainy in the morning brightening later, but tides dictated that we had to launch before 1030 and recover after 1500 so it looked like we’d be out for the day.

Not wanting to make the girls endure the bad weather Dad and I went down in the morning and got the boats out. We took the RIB and the Hobie although I opted not to don the rather uncomfortable trapeze harness as the wind didn’t look too high.

We got out of the creek with out too much of a problem and soon found that there were some nice gusts to make life a little exciting!
Heading down river we came across what looked to be a green fishing boat. Strange place to be fishing though, I thought. But no ‘A’ flag signifying a dive boat. I kept an eye on it for a few minutes before spotting a red pillar buoy, exactly the type used by divers to mark their position before surfacing. How irresponsible I thought. I imagine they assumed they’d get away with it being winter and with no-one else around.
It wasn’t until 20mins later when I could see six red pillar buoys dotted around the mouth of the Helford, one of which popped up 20 yards ahead of me necessitating a quick swerve to avoid it that I realised quite how stupid they were being. I thought about going over to make a remark but I figured I’d probably scared them enough!

Having had our fun in the rain we headed to the Ferryboat Inn to meet the girls and have some lunch. Just as Dad and I sat down to wait for them to arrive a rather loud alarm rang out over the water. ‘Oh no! I forgot to turn the radio off’ exclaimed Dad.
I wandered back down the the boat to cancel the alarm. It seems that someone in the mouth of Plymouth harbour had sent off a Distress Relay on the DSC radio! Knowing that we were well out of range I cancelled the alarm before returning to my St. Clements. (No-one knows how to make them these days!)

The Afternoon brought the forecast beautiful sunshine and my family had a great time in the RIB including filming some footage on my camera.

As pictures (or even videos!)  speak louder than words… enjoy!