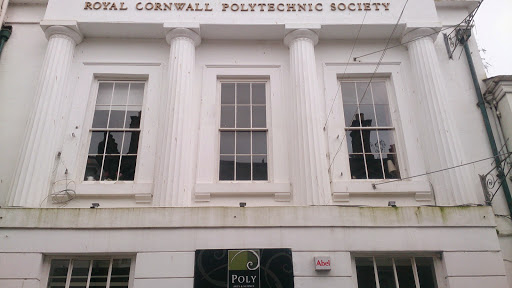 My home for the latter part of this week has been the Royal Cornwall Polytechnic Society in Falmouth. Or, as most know it, The Poly. I am here with Bec Applebee’s ‘Ugly Sisters’ which is based on the story of Cinderella with a Cornish twist and a quest for True Beauty.
The Poly is a wonderful building which I have until recently underestimated. It does however have its quirks and today was no exception.

On arriving at the rear door at 8.30am with Jenny, one of our cast, we came across the lovely Dot Peryer, Poly Program Manager, a lady with a box and a man with a fire extinguisher. All looked markedly glum, understandable at 8.30 in the morning I suppose but then Dot uttered those fateful words. ‘We have a bit of a problem…’ not what you want to hear when in 90 minutes you are due to be playing to 180 primary school children after having finished setup and lx focus…
When we enquired as to the nature of this problem she showed us the remains of the key (apparently lent to a builder) jammed into the lock! Three minutes later and with the persistent application of a Leatherman we managed to gain entry. An unusual feeling of achievement for getting through a door!

The first show went very well with only the odd bit of spontaneous script rewriting after two weeks without a show! The second show was going well and it wasn’t until the second scene that the phone rang. THE PHONE RANG?!
Now this wasn’t your usual ‘who forgot to put their mobile on silent’ faux pas this was a proper landline phone with a proper landline phone ringtone. And from my position in the tech box at the back of the auditorium it sounded like it was coming from behind me. And it was, from the projectionist’s box. Why have a telephone in the projectionist’s box!? Is it just me that thinks this seems unreasonable? Access between the two small rooms is difficult and involves crawling onto a ledge and then through a door that even a hobbit would baulk at so silencing said device was nigh impossible. Never mind. At least it masked the thunking sounds coming from the builder next door!

Rural touring is not to be sniffed at and The Poly, in my opinion, is a rare gem in the circuit. A theatre that is not quite snazzy enough to attract the big shows and their big prices but is more than capable of hosting a wonderful selection of new Cornish talent.

‘What about the Pasty?’ I imagine you might be thinking to yourself. Well lunchtime presented me with the opportunity to repeat a custom that happens to me quite a lot when in a bit Cornish town. It would seem I am quite incapable of walking into a Pasty shop without buying a pasty. Even if that wasn’t what I wanted in the first place! Anyway Pasty Presto on the main street in Falmouth surprised me. Although not a big, well recognised name in Cornish pasty making it would appear they make a damn good medium steak!