Glass was a lighting, sound and dance piece which offers an insight into the fractured perspective of an individual’s struggles through lockdown.

The project aimed to put lighting and movement on an equal footing, working in tandem to evoke the feelings that many people have experienced during this very difficult time.

Rob Mennear, choreographer and director of his company GRIT Dance, had a very clear idea of what he wanted to create and had already been in discussions with suppliers JHAV about the best setup when I was brought onto the project.

The rig consisted of five LED battens rigged vertically on booms surrounding a 5m square stage space. We also added four floor Parcans to use as a contrast and dynamic shift for certain moments. Finally, a Parcan rigged on the DSL boom provided a very different effect for the final part of the choreography.

The one remaining decision was what control system to use. This was largely based on what I was most confident programming – as usual the time and budget was tight so there was no time for me to learn a new desk. I chose Qlab for timecode and audio and ETC Nomad running Eos software for lighting as it was capable of producing some of the advanced effects I knew we would need and I had used Ions at Rose Bruford and Nomad software on contracts at AMATA and with Bgroup.

A key decision that had to be taken was which mode to run the LED battens in. For ease of programming I was tempted to run them in single unit mode where all 12 cells respond together. However, I was aware that this would limit us in the types of effects we could create and so in the end, I chose to run each cell individually which Nomad was very capable of handling. I’m glad I did as we were able to create some awesome effects using the individual cells. 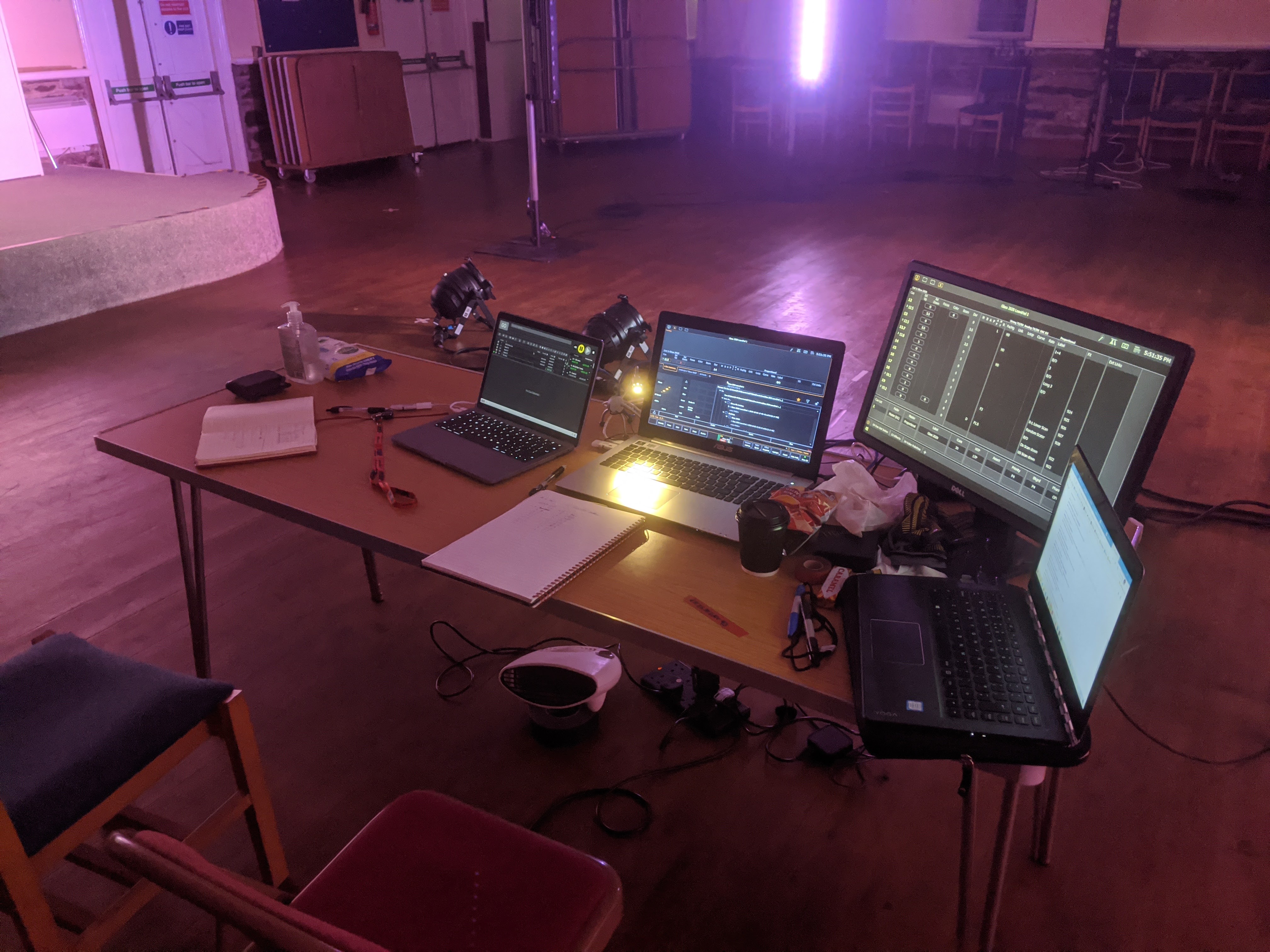 Rob and I had two days in a space in Lostwithial to program the desk before he spent two days with dancer Gil Ratcliffe developing the choreography. We spent some of the first day ensuring that the scale matched the time available and, once we had ironed that out the second day went much more smoothly. The piece was built in Qlab which fired both the audio tracks and, using OSC, the lighting cues on Nomad, so once Rob pressed GO, the whole piece ran to time, every time.

The dress rehearsal at The Minack went perfectly – it is wonderful to complete a setup and hit go and watch everything fire off exactly as it had in creation.

The elephant in the room is of course Covid-19. In October 2020 the UK infection rate was rising fast from its summer level. The kids were back at school and the weather was getting colder. The guidance was that you could work, if you could keep 2m apart or 1m with extra measures. During our time in the rehearsal space in Lostwithial, Rob and I both wore masks, and had hand sanitizer close by. We were seated 2m apart when programming and made sure we kept our distance at other times. It was an amazing opportunity to be one of the few designers creating work during a pandemic and one that I will remember for a long time. 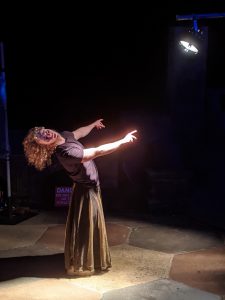 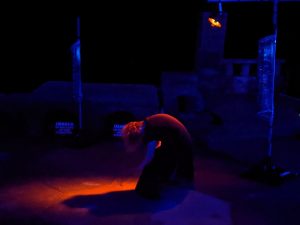 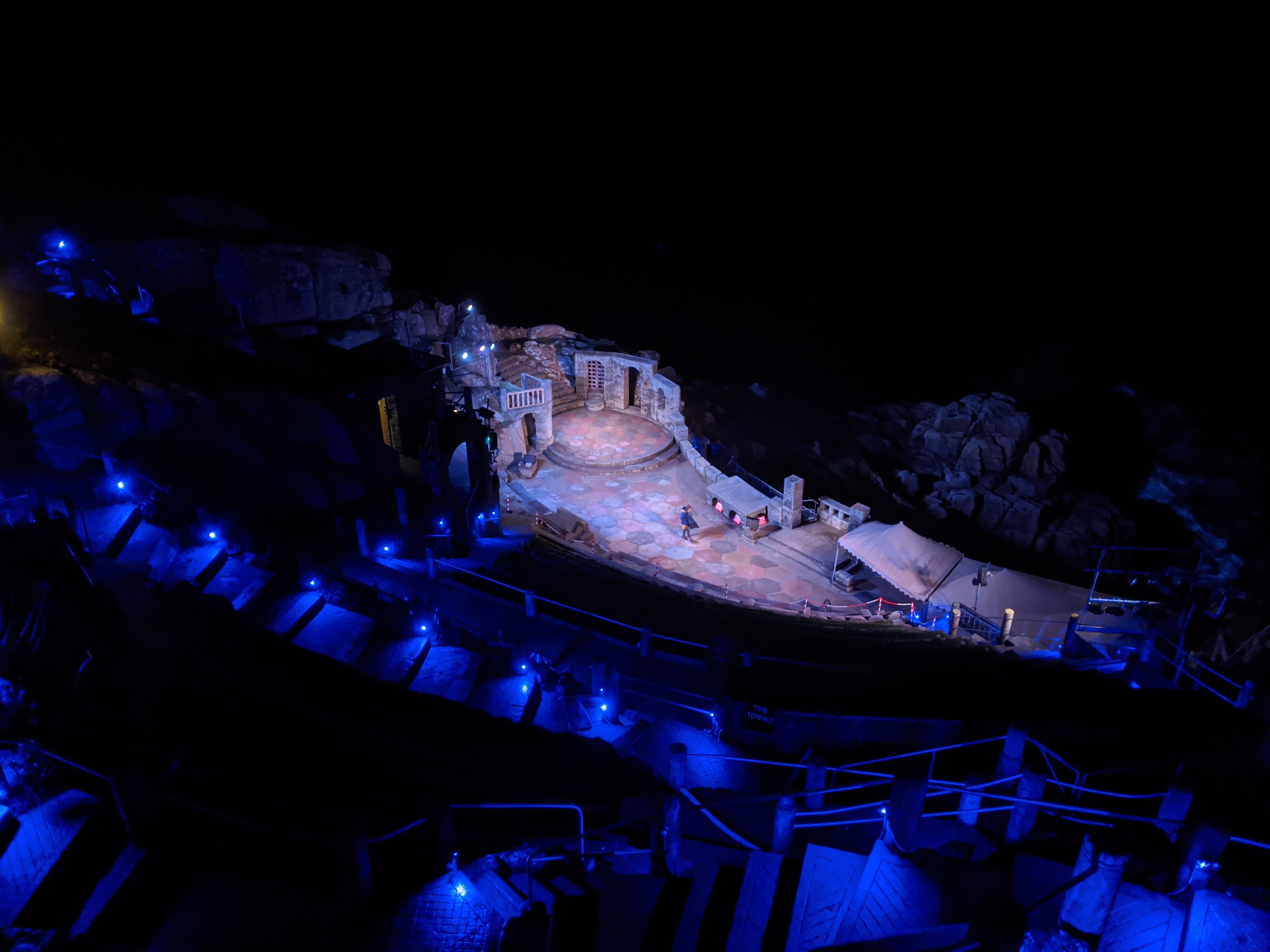