So! This is it, my next BIG adventure! It is something I have wanted to do for a while but circumstances haven’t allowed until now.

I started looking for a boat in earnest in October 2017 and after looking at several different options settled on a Sadler 26 as my first choice. I had looked at Westerlies – a manufacturer I knew and trusted having grown up on a 21ft Jouster and raced on a GK33. My initial plan was to buy something that I could conceivably get on a trailer in order to store it at my parent’s place. Eventually I came to realise that I had to drop that pre-requisite in order to satisfy my desire for something with reasonable sailing performance as well as accommodation for more extended cruising. The Sadler 26 has a great pedigree having competed in both the AZAB (AZores And Back) and Round Britain races. Little did I know that I would be putting its seakeeping abilities to the test so early in my ownership!!

I had a few criteria I was fairly set on – it had to be a fin keel. I wasn’t happy to sacrifice sailing performance for the advantage of being able to take the ground. (Despite my surveyor’s advice on the hydrofoil effect of the S26 bilge keels). A separate heads compartment was also a must as was a relatively recent engine.

My budget was tight of course, I was dipping into my savings and didn’t want to dip too far! I had seen a lovely example of a S26 on Apollo Duck for well over my price range, I had noted it and all but discounted it. That was until we found it towards the end of November having come down a bit in price. I rang the owner and explained my situation and she encouraged me to travel to Southampton to take a look and even go out for a sea trial.

So it was that I arrived at Shamrock Quay Marina on the Itchen river on a grey, windless Sunday in early December kitted out in my salopettes and jacket.
Ceri met me by the marina office and showed me down to Mandarin’s temporary berth on ‘D’ pontoon. Moored stern to she looked great but I was a bit too nervous to quite appreciate it at that point! Having never viewed a boat before I was quite unsure as to what to do! I had consulted a Cornish boat surveyor who was known to our family and who gave me some very helpful advice but actually being there and doing it was a very different question!!
My solution was to look at absolutely everything from bow to stern and hope that I would notice anything untoward. Having started with a good look over the decks we set off for our sea trial. Both Ceri and I expecting it to be totally flat calm and only to go through the motions of raising the sails. Having negotiated us out of the marina and under the bridge Ceri handed the helm over to me. We got the main up soon after, followed by the genoa as a very light northerly was teasing us from over the docks.
As we rounded the dockhead between the rivers Itchen and Test the full force of the 14kt northerly filled thee sails and Mandarin dutifully heeled over and picked up speed. We spilled wind a bit until Ceri was back on deck when we sheeted in and pointed as high as we could. Ceri noticed my smile and picked up on it – “It’s OK” he said to Carol, “he knows how to sail!” – High praise indeed!!
The rest of the sea trial went well with us successfully dodging Red Jets and a large container ship leaving the Test. Back on the pontoon I went over the boat from forecabin to quarter berth looking in every locker inspecting everything I could think of.
Not finding anything of major concern I decided that she was the one. We agreed the price and on Thursday of the following week she was mine! 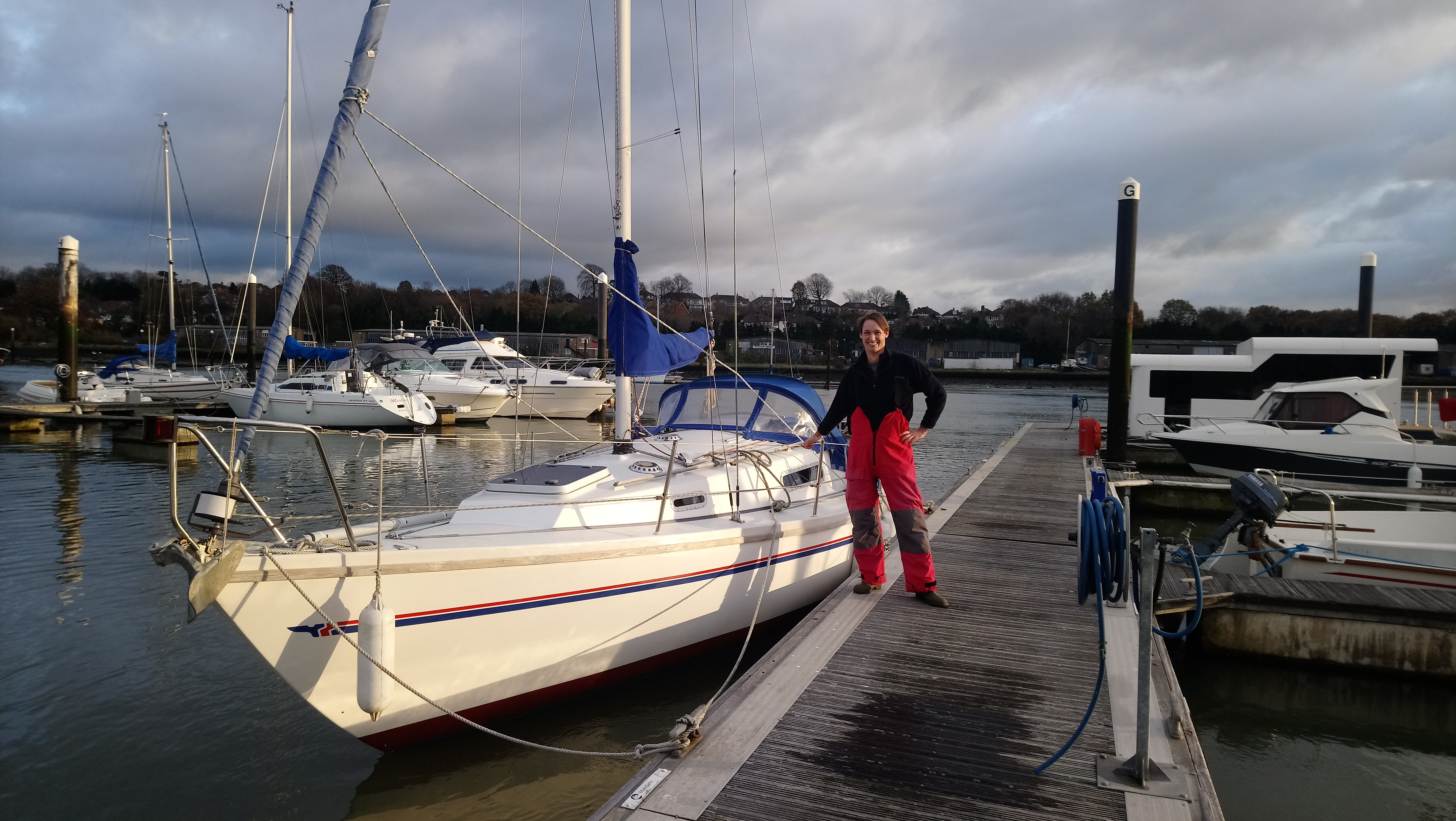 The next challenge was how to get her to Cornwall. Her berth in Southampton was paid until early February and I was lucky enough to secure a short term mooring in Port Navas Creek for February and March before she could move onto her summer mooring in the river. Finally the departure date was set for 29th January – the tide would be on the ebb from early morning and I would have just been freed from my work commitments. I spent the previous two weekends on board, the first with a trip to the London Boat Show to find some deals on kit (few and far between in fact!) and the second to take up ‘Bob’ my newly acquired tender and engine.
My fellow instructor Sammy who had completed her Yachtmaster a few weeks before had said she would come and help sail her down.

And so it was that we set off on our train journey from Truro to Southampton to begin our big adventure!!